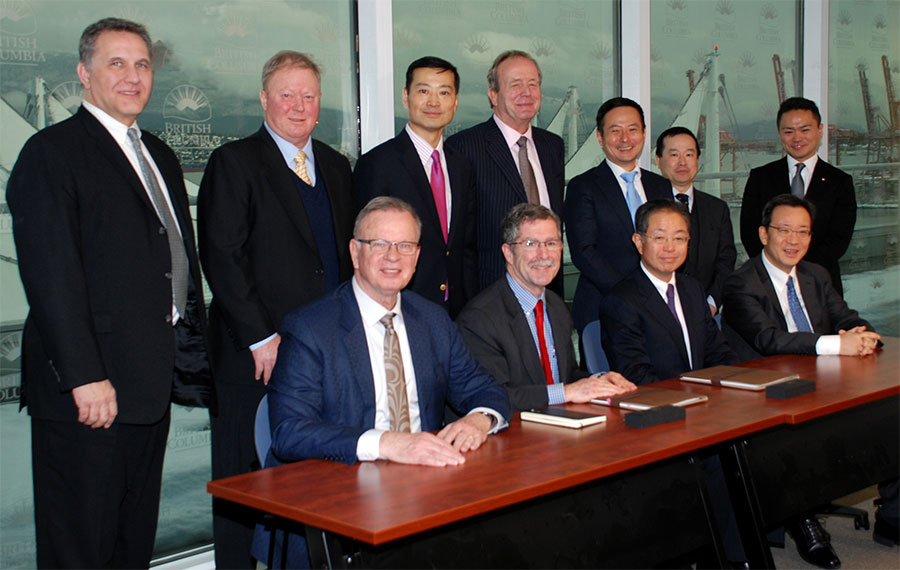 January 16, 2020 – With representatives from both the governments of British Columbia and Japan watching, the CEO of Pinnacle Renewable Energy, Mr. Rob McCurdy, and the President of NYK Bulk & Projects Carriers (NYKBP), Mr. Motoyuk Nose, entered into a 15-year agreement to export wood pellets to key ports in Japan. “This is a very exciting moment,” said the Honourable Bruce Ralston, Minister of Jobs, Trade and Technology. “Not only will the contract being signed today will provide clean energy fuel for Japan, but it also signals a strong future for B.C.’s forest products and the role Pinnacle Renewable Energy will play in providing sustainable energy solutions for the world.”

The agreement between Pinnacle Renewable Energy –the Canada’s largest wood pellet producer and the world’s third largest – and NYKBP – Japan’s national flag carrier,  has been developed over the period of a year, including the launch of a new vessel, the New Pinnacle. The New Pinnacle, a Handy-class vessel that will carry roughly 33,000 tonnes of wood pellets on an average of six sailings per year beginning in January 2021, will utilize both the Woodfibre Terminal in North Vancouver and Westview Terminal in Prince Rupert.

“We were in Japan three months ago to celebrate the launch of the vessel,” said McCurdy, describing the moment as a highlight of his career and further noting the importance of the partnership. “In addition to developing great relations, great partners and great friends, this agreement signifies the importance of a growing Japanese market for reliable, stable, renewable energies.”

In speaking on behalf of NYKBP, President Nose also congratulated the team for their successful efforts, noting it was a great honour to work with Pinnacle to fulfill Japan’s commitment to consume more clean energy and reduce greenhouse gas emissions – a comment echoed by General Consul Takashi Hatori, representing Japan’s government.

NYKBP is no stranger to B.C.’s coast. The dry bulk shipping line exports many products from B.C.’s terminals – logs, grains, copper concentrates, potash, coal, and, of course, wood pellets. “We are proud of the relationship between Canada and Japan and very honoured to be a part of this agreement,” said Mr. Nose.

Before closing the official signing ceremony, Mr. Hatori congratulated Pinnacle and NYKBP and spoke to the importance of the agreement. “It is an honour to be here today to witness the beginning of a long and fruitful partnership between these two companies,” he said. “Recognizing the growing importance of efforts to improve the environment, this agreement is very timely.”