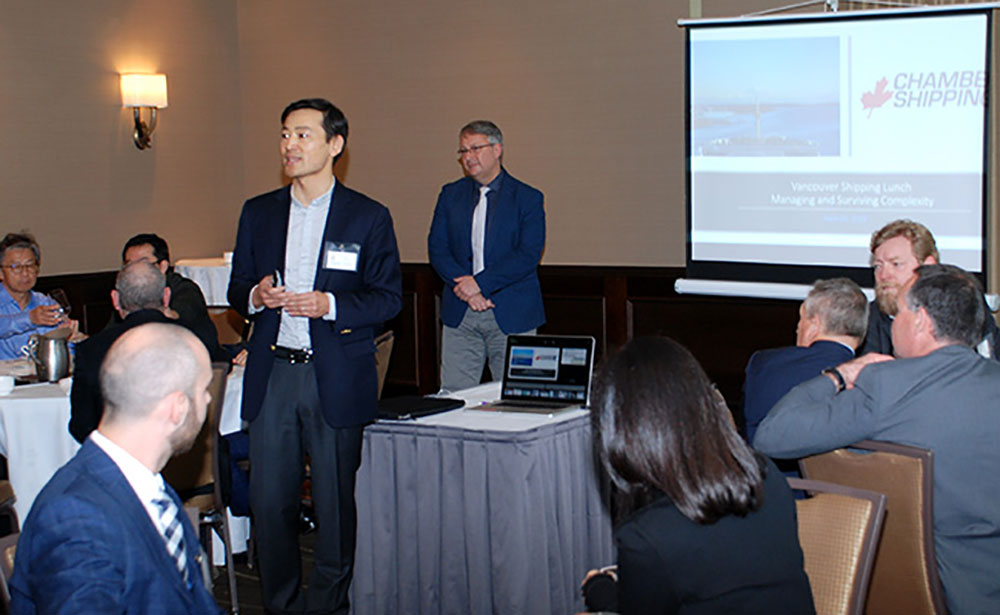 The first Vancouver Shipping Lunch of 2019, held on April 24 at the Terminal City Club, saw strong attendance numbers as the maritime community came together to network, hear interesting presentations and enjoy a buffet lunch. The lunch, organized by Vancouver ShipInvest & Management Ltd., is a great opportunity to catch up with colleagues in an informal and relaxing atmosphere. The short presentations allow for a high-level look at current issues and initiatives within the industry.

The first presentation, by Robert Lewis-Manning, President of the Chamber of Shipping, looked at the complexities of the current environment for shipping. In a span of 10 minutes, Lewis-Manning touched on the key issues facing the industry, including the IMO’s greenhouse gas emission reduction goal of 50 per cent by 2023; gaining access to markets for Canada’s resources; current international trade challenges; and the proposed moratorium on tanker traffic on the northern coast of B.C. While there are challenges, Lewis-Manning noted, there are also opportunities and positive initiatives, such as the National Trade Corridor Fund which is investing in key infrastructure for the Pacific Gateway. Additional topics, including amendments to the Pilotage Act, marine spatial planning and a proactive vessel management program, were highlighted.

Lewis-Manning was followed by Thor Brandrud, Managing Director with Simpson Spence Young, who provided an overview of the current dry bulk freight market. Brandrud reviewed the market in past years, noting that it had been a low market for a number of reasons – some of which were cyclical and others unexpected, such as a clamp down of coal imports into China. He highlighted factors that would be required for recovery including an easing of trade wars and stronger economic growth. Additional factors at play for the market included the sulphur caps coming for all ships in 2020 and the costs of the low sulphur fuel. Brandrud told attendees that he expected uncertainty in the market for the next 12 months.

The third speaker was Alistair Johnson, Designer of the Tig Rig Retrofit Sail System. The System is a way to retrofit sails to the world’s existing flat-decked merchant ships, tankers, bulk carriers and some ferries. Johnson reviewed how the self-contained units solved a number of issues related to sail technology for large vessels, including the ability to operate the sails in preparation for docking. The system can save ship operators as much as three per cent in fuel costs and result in an ROI of 3.5 years.